We added gift packs to our website! Did you see?!

One more week closer to my most favorite holiday....Thanksgiving!  This weekend, we are having Friendsgiving which is being hosted by Matt and me!  I have been making things since Wednesday.  It started with a delightful butter toffee that is topped with chocolate and flaked sea salt that I decided to make as little seat settings (I bought little plastic bags with gold ties)...I'm so cute.  Then last night I deboned one of the turkies I bought and put it in the old crock pot with some veggies and water to start my 36 hour stock for gravy, I also made cranberry sauce and roasted the beets that I need.  Let me tell you about this cranberry sauce.  Easiest sauce I ever did make.  I put a bunch of cranberries in a glass dish, threw in some sea salt, orange juice, orange zest, brown sugar, and SHALLOT and threw it in the oven for about an hour at 350...stirred it a few times, but that was pretty much it.  It is SO good.  I was looking around the kitchen last night to find other things to eat it with.  Tonight I am making wet chocolate cake with cream cheese frosting (secret family recipe), some tomato sauce, I will cube up the cornbread that I need for the stuffing I am going to make, and chop up a bunch of celery and carrots and onions.  Gotta prep for success!  I will let you know how things end up.

I know that I promised I would share my Halloween costume with you last week, but I had to wait until my friend finally sent me the picture.  So...here is a picture of my friend, Linay, feeding me chips with dip: 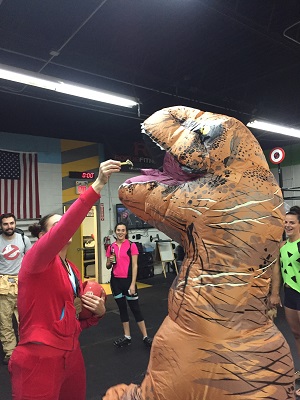 That costume was SO HOT.  I was dying.  There is a video of me doing pullups in it, which is hilarious...but I couldn't figure out how to post that on here, so you will just have to take my word for it.

So, besides talking about Friendsgiving and letting you catch a glimpse of the perfection which was my costume, I'm here to talk about gift packages that we are putting together for the holidays.  As you can see (or if you haven't seen yet, here is the link:  http://www.karamoorwines.com/Store/Holiday-Gift-Packs), we have taken the guesswork out of what to choose to send your friends for (currently) Thanksgiving....or even as a little mid-week pick-me-up (our Karamoor's Choice package is perfect for that!).  The 3 packs that are up on the site currently are our Turkey Pairing Gift Pack, our Ham Pairing Gift Pack, and our Karamoor's Choice Pack.

We chose to include our 2013 Cabernet Franc, our 2013 Chardonnay, and our 2015 Rose in our Turkey Pairing Gift Pack.  I believe that you will not be upset with pairing any of these wines with your turkey dinner this year.  The 2013 Cabernet Franc will go perfectly with turkey as the red option due to the fact that it has nice fruit characteristics while still having a good earthiness.  It also has nice round tannins, so it is not too dry (and since sometimes....turkey can be a little dry (depending on the cook!), you don't want to pair a super dry or tannic wine with it).  The 2013 Chardonnay is another perfect match for turkey due to the fact that it has notes of green apple and is a very fruit driven style of Chardonnay, it has crisp acidity while still maintaining an everlasting finish.  It will go beautifully for the white wine drinkers of the meal.  The 2015 Rose has notes of raspberries and strawberries, it is soft and balanced, it has a light and clean finish which makes it a great choice to accompany turkey, stuffing, gravy, and pretty much anything else on your table (it's not overpowering and will lift up all of the other flavors of the meal)!

We chose to include our 2015 Sauvignon Blanc, 2015 Rose, and 2013 Chardonnay in our Ham Pairing Gift Pack.  The 2015 Sauvignon Blanc will go perfectly with ham due to the fact that you get notes of honeysuckle, pineapple, and coconut....all flavors that are going to please the palate when paired with ham...and sometimes you even find those flavors actually flavoring the ham.  What could be more perfect?  WELL, perhaps our 2013 Chardonnay!  It's another perfect match for ham due to the fact that it has notes of green apple and is a very fruit driven style of Chardonnay, it has crisp acidity so it evens out some of the saltiness in the ham (the same could be said for our 2015 Rose!).

The "Karamoor's Choice" pack is the kind of pack for the person that likes to take chances.  The pack is chosen 100% by employees at Karamoor, it may include a Reserve wine, it may include a white wine, a red wine, a rose...there is no telling!  The only thing that you know is that it will equal at least $60 worth of wine!

Well, I am signing off here now due to the fact that we have a tour group arriving shortly!  On my way home, I have to swing by the grocery store (3rd stop this week) to pick up the rest of my ingredients for tomorrow!  I hope that you have a wonderful weekend.  Until next time...

Commenting has been turned off.