It's National Chardonnay Day AND Friday of Memorial Day Weekend!  The official kickoff of summer!  Warm weather, barbeques, more vacations, and super busy work time...here I come!  I looked at our calendary and Matt and I have something EVERY weekend (whether work or enjoyment) until August 5th.  Is that crazy or is that crazy?  I have a feeling that I am going to blink and this summer will be over.

This weekend, Matt and I are heading up to New Hampshire with my family.  Hopefully we can time the trip where we do not hit too much traffic because that can make a 6.5 hour car trip an 8.5 hour car trip in a snap!  I'm looking forward to the weekend though.  It has been a while since we've gotten up to our house on Lake Winnepisaukee and it's always so great once we are there.  There is something about the lake that is very relaxing, but then you add my crazy family and it's a lot of fun too.  It is the perfect balance!

So there have been a lot of wine related National Days this week.  On Wednesday, we had #slurpheardaroundtheworld and on Thursday it was #nationalwineday and now today it is #Chardonnayday!  Because of all these wine holidays, we had to offer some great sales.  Hopefully you got to take advantage of them (judging from the amount of deliveries we are making today, it appears many of you did!).

Next Friday we have a group from the Main Line School Night coming out.  There is a group of 12 people coming and we are going to have a tour and a tasting with them.  We will explain the winemaking process, we will tour the winery and vineyards, we will explain what we are trying to accomplish, and we will taste at least 5 wines with them.  It should be a great time!

We are going to have limited tour dates in the month of June (and July) because we don't have many free Fridays in June due to scheduled Karamoor events and then Shaina is on vacation the last week of June and I am in vacation the first two weeks of July.  So, for the time being our only scheduled tour date is June 16th.  We hope that you can make it!

I hope that your Memorial Day Weekend is filled with fun and sunshine.  Remember to be thankful on Monday for all that you have as we remember all of those that have paid the ultimate sacrifice in order to defend our freedom.  Until next time...

A wedding wrap up....and some Karamoor stuff too!

Hi!!!!!!!!!!!!!!!!!!!  Well, wedding palooza is officially over.  What are Mom and I going to work on now?!  Matt and I went to Saint Lucia for our honeymoon.  It was great.  We stayed at the Viceroy and when we were leaving, a guy at the airport told us that it's where Brad Pitt and Matt Damon, and etc. stay when they visit the island.  I have no idea if that is true, but it would make sense if they did.  The resort was gorgeous, but food and drink were SO expensive.  Like a tiny pina colada was $16.  I mean......how's a girl supposed to drink 20 of those without breaking the bank?  Anyway, I'd definitely go back.  We went deep sea fishing one day - only caught 1 fish in SIX HOURS.  That is a lot of trolling.  We only got 2 bites all day!  The fish that we caught was an awahoo...it was like 2 feet long and about 30 lbs.  LOL.  The 2nd bite that we got seemed like it would be a little more exciting because it broke the line, and almost ripped the fishing rod off the boat!  But, we didn't get to fight it for too long (hence the broken line...).  We also went ziplining, we went to this cool waterfall, and we checked out the volcano.  The volcano was pretty awesome.  There was this mud that you were suppposed to rub on yourselves and then you let it dry and then you get into this hot spring (which was hot hot hot!) to rinse off.  They say that the mud has healing properties...  The thing that I can't get over is that the way that they get the mud.  The mud comes from a cave basically inside the volcano and this guy has to go and collect it!  I would not want that job, that's for sure.  It seems like it could be a real gamble with death.  Not only could you get burned, but like the whole walk up the volcano is over the lava rock and it's all sharp and craggy and you could def roll an ankle.  Anyway, Matt and I enjoyed our time on the island, the people that live there are just so nice.  I would say that the coolest thing of our trip is that I met a guy that I knew from my last trip to Saint Lucia which was 20 years ago!  I took a vacation with my mom, dad, and brother in the 90's and we played basketball and made friends with 2 men who worked at the resort...Andre and Leei.  WELL, we ran into Andre at one of the restaurants that we went to when we were exploring Soufriere!  Luckily, Mom took a picture of me, Dad, and Zack with Andre and Leei, so my dad sent me a picture of the picture so that I could show Andre.  It was so cool.  Obviously we took an updated picture :)

Anyway, in the midst of all my wedding happiness, we have been humming right along here at Karamoor.  Lots of things in the works, lots of things happening.  This week we are replanting the 2.5 acres or so that we ripped out 2 years ago.  The vines that had to be removed were Merlot grapes and we have been replanting them with more Cabernet Franc and Petit Verdot!  I was out there in the field yesterday as they were replanting (because we were filming it with WHYY) and it was so hot!  I felt so bad for all of them because I was melting just standing there, I can't imagine how they felt digging the holes and planting the vines.  Typically our vineyards have been planted with a big tractor that is lined up with a laser, but because this was a replant and the end posts were already put in, we had do the 2.5 acres by hand.  Here's a picture of our vineyard manager, Joe, looking like an Italian Indiana Jones! 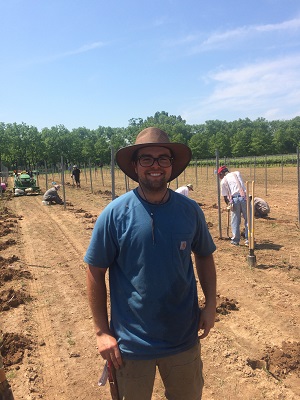 So in addition to this replanting, we've almost completed all of our bottling.  The only one still remaining is our 2015 Merlot!  There won't be too much of this, but I had the pleasure of giving this a taste yesterday.  I think that you will all be very pleased with the 2015 Merlot!

There are a lot of other exciting snippets I could share with you, but I think that I will save those snippets for next Friday...which is already Memorial Day Weekend!  Yeesh!  Anyway, I hope that you have all been doing well and that you have some excellent things planned for this weekend.  I looked at the weather and it seems like it will be a perfect Spring weekend!  Not like a confusing August weather weekend.  It's May, Mother Natuture!  Until next time...

You guys!!!!!!!!!!!!!!!!!!!!  We got married!  It was literally the most perfect day.  Other than the fact that Mom was sick.  I felt so bad!  She was so sick, she couldn't get out of bed until she was scheduled to get her hair done, and even then I think she was only there because she had to get ready.  She didn't look sick by the time we were all made up, and by the time we were ready to walk down the aisle, I think the adrenaline had kicked in.  But...besides Mom being sick, it couldn't have been a more perfect day.  Everything was perfect.  The ceremony was at Saint George Greek Orthodox Cathedral, and if you know anything about the Greek Orthodox religion, you probably know that this is usually quite a serious ceremony.  Not in our case.  There was a lot of laughter up on that alter...even the priest cracked a few jokes at the end.  The organist who was supposed to play the music as we were pronounced husband and wife....fell asleep!!!  So instead of music, we had hooting and hollering from all of our friends and family.  I don't think I could have planned it better in that regard...it just seemed very fitting that we leave the church with hoots and hollers.

After the ceremony, Matt and I bee lined it out of the church with the rest of the family close behind.  We boarded a trolley with the immediate family (there were 35 of us...haha...) to set off for pictures.  The rest of our guests boarded buses for a boozey city tour of Philadelphia (which ended at the reception venue).  Matt and I got photos by ourselves in Elfreth's Alley which is the oldest street in Philadelphia...where my veil blew off my head!  Classic.  Then we got back on the trolley and we went to this old vintage furniture warehouse.  It was awesome.  The lighting was picture perfect and I am so so so excited to see the photos from this photoshoot.  In addition to photos of me and Matt, we got photos of all the family members in a ton of different groupings.  There will be a photo for every person that was at this warehouse which is awesome.  After the photoshoot at the warehouse, we got back on the trolley and we took a picture under the El when we arrived at Front and Palmer.  I saw a proof of it and it turned out exactly how I had pictured it....I will share it with you when I get the photos back, but for now you will have to visit our instagram page:  https://preprod.instagram.com/karamoorestate/.

When we got into the reception venue, Mom, Auntie Des, Kara, and the lead female vocalist from the band(!) helped to bustle my dress.  Then it was party time.  The night went exactly to plan...other than Dad and I forgot a lot of our dance steps (but I don't think that anyone noticed...).  It was a wild wedding.  The dance floor was never empty!  The reception ended at 11:30PM, and the after party went until after last call!!

Matt and I are leaving for our honeymoon tomorrow.  We are super excited!  I am sure that I will have lots to fill you in on in TWO Friday's!  Hopefully then I have some photos and/or the video teaser to share with you.  Until next time...